@NyanNyan is a character in the series Magical Girl Raising Project. Part of Team Daisy, @Meow-Meow is a retired Magical Girl that is fiercely protective of her friends and struggles with strange, recurring memories. @Meow-Meow's friends agreed that because Tanahashi Himari was a little lazy, she should end her name with "nyan" as to resemble a cat. However, upon losing the two of them in an accident along with part of her memory, @Meow-Meow later has all of her memories of being a Magical Girl removed and retires. Before requesting the Magical Kingdom to erase her memories of magic, @Meow-Meow is often reminded of her friends. Things like kicking a soccer ball, making someone laugh, or simply doing her Magical Girl duties always brings them into mind. She quietly works as a delivery girl for the Land of Magic in the meantime, using her magical ability to safely transport items at their request. @Meow-Meow's magic allows her to seal any object, regardless of size, shape or mass, into scrolls that she can carry around with her. She can only seal non-living objects. 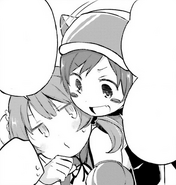 Add a photo to this gallery
Retrieved from "https://yuripedia.fandom.com/wiki/@NyanNyan_/_Himari_Tanahashi?oldid=32583"
Community content is available under CC-BY-SA unless otherwise noted.