Akane Shinjo is a main character in the yuri series SSSS.Gridman, she served as a central antagonist in the same series.

Akane appears to be a nice girl. However, behind that facade lies a mentally troubled individual with sociopathic tendencies, easily harboring petty grudges against anyone who wrongs her. She is also shown to be extremely manipulative. She keeps up her kind and peaceful charade on a daily basis, only showing her true colors to those who knew beforehand, or figure out the truth for themselves. This plays into her manipulation tactics. She is shown to be very adept at art, and has no trouble sculpting the forms of kaiju for Alexis to bring to life. These kaiju are extremely detailed in both design and aesthetics - akin to ones made by a professional modeller. In addition to artistic skills, Akane is also remarkable when it comes to technology. 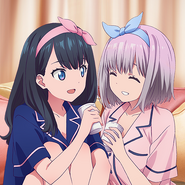 Add a photo to this gallery
Retrieved from "https://yuripedia.fandom.com/wiki/Akane_Shinjo?oldid=32589"
Community content is available under CC-BY-SA unless otherwise noted.