Amane Ōtori is a main character in the yuri series Strawberry Panic!. Amane appears to be a very loved and respected member of the school. She is often seen riding a white horse named Star Bright, which makes her seem more like a prince (a title which Shizuma later marks her with) from a fairy tale. She tends to have a silent demeanor, which also makes her seem intimidating, making her difficult to talk with or approach. It seems that she is actually quite shy and states that she dislikes being the center of attention, causing her to decline acceptance of presents from her many fan girls (with the exception of Hikari). 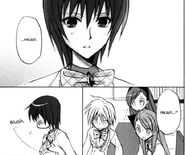 Add a photo to this gallery
Retrieved from "https://yuripedia.fandom.com/wiki/Amane_Ōtori?oldid=31770"
Community content is available under CC-BY-SA unless otherwise noted.