Asami Kawahara is the protagonist of the story Roundabout of Yuri Hime Collection. A stubborn, naive, vindictive and distrustful young woman who used to stay in the library in her school days. She and Chiharu Ōno kept their relationship a secret because they didn't want to worry about jealousy from Chiharu's many admirers, until Chiharu vanished one day, Asami asked a teacher about it and found out her family had moved abroad for work. She never knew why she didn't tell her. 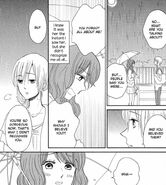 Add a photo to this gallery
Retrieved from "https://yuripedia.fandom.com/wiki/Asami_Kawahara?oldid=32640"
Community content is available under CC-BY-SA unless otherwise noted.