Asuka Ōsachi is the protagonist of the yuri visual novel Nurse Love Addiction (known in Japan as Hakuisei Aijou Izonshou). The honest, simple, relaxed, fluffy and somewhat sluggish older sister. She's not dumb, but her memory could use some work. Nicknames during high school: "Jellyfish Club Leader", "Lazy Sis." In general, she's pretty much hopeless, but she has a knack for being loved by others. When it really counts, her ability to get things done and decisiveness shines through. Doesn't have memory of the first 8 years of her life, but she's not too worried about that. She heard from her parents that she was being mischievous at one time when she was a kid, climbed up a tree and fell off. But she doesn't remember any of it. Up until her high school career inquiry, she hasn't given much thought to her future, but from the words "I'll be a nurse!" written in the final page of her favorite picture book in elementary, she decided to aspire to be one. She currently doesn't have a clear reason on why she chose that path, but together with the help from her little sister Nao, both enroll in the Imperial Capital Nursing Technical School, getting one step closer to becoming a nurse. Her birthday is 2 April. 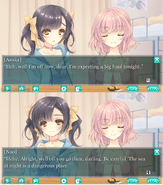 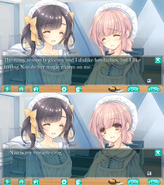 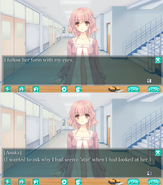 Add a photo to this gallery
Retrieved from "https://yuripedia.fandom.com/wiki/Asuka_Ōsachi?oldid=38223"
Community content is available under CC-BY-SA unless otherwise noted.