Aya Komichi is one of the main characters on both the Manga and Anime Kiniro Mosaic. Aya is a tsundere and timid girl who gets embarrassed quite easily. She is a smart student, but has a habit of forgetting things. While Aya is level headed most of the time, she can be quite panicky whenever Yōko unintentionally makes her heart flutter. 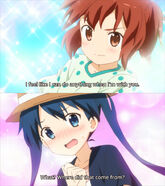 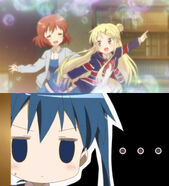 Aya getting frustrated over the fact that Yoko is everywhere in her mind.
Add a photo to this gallery
Retrieved from "https://yuripedia.fandom.com/wiki/Aya_Komichi?oldid=31620"
Community content is available under CC-BY-SA unless otherwise noted.