Ayumi Ayasaka is a main character in the series Lilycle Rainbow Stage!!!. An altruistic, friendly, refined, and relaxed School Art Club Member whose hobby is Sewing, knitting, collecting cute and small things. Although normally cheerful and calm, Ayumi has such a serious and caring personality that she can't help herself from taking an obedient role when Waka comes into the picture. Ayumi's room is held captive by dolls she made herself. Her birthday is 2 September. 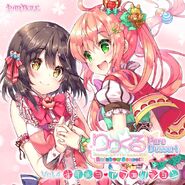 Add a photo to this gallery
Retrieved from "https://yuripedia.fandom.com/wiki/Ayumi_Ayasaka?oldid=34418"
Community content is available under CC-BY-SA unless otherwise noted.