Beelzebub is a side character in the yuri series Seven Mortal Sins. A Demon King that Lady Lucifer keeps like a pet, bdsm-style, as Lucifer is the only being who can give her orders. Shs's148cm tall. 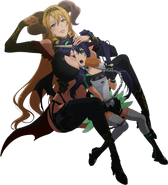 Add a photo to this gallery
Retrieved from "https://yuripedia.fandom.com/wiki/Beelzebub?oldid=34541"
Community content is available under CC-BY-SA unless otherwise noted.