Benten-chan is a side character in the non-yuri visual novel Kami-sama Nante Yondenai!. A relaxed goddess of beauty, using "fate" to help women on their quests for beauty. (Not the same Benten as the one of the seven gods of luck). 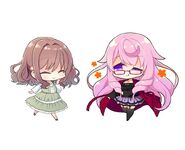 Add a photo to this gallery
Retrieved from "https://yuripedia.fandom.com/wiki/Benten-chan?oldid=32684"
Community content is available under CC-BY-SA unless otherwise noted.