Black-Tailed Prairie Dog is a type of Friend which has made appearances in the Kemono Friends anime as well as the original mobile game. She's skilled at sentry duty and states that she doesn't feel lonely since she can watch the skies. She gets happy when someone calls her by her nickname, "Prairie", rather than her full name. Black-Tailed Prairie Dog is a hyperactive Friend who is always feels the need to be moving and working, usually by digging holes or helping others. She's simple-minded and often doesn't think before acting; however, she can learn quickly and follows orders perfectly. 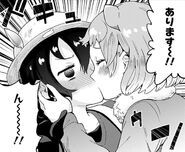 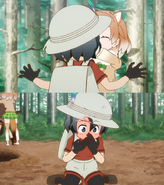