Bronya Zaychik is a main character in the series Houkai Impact 3rd. A Russian gilr who's known as the Silver Wolf, a cold-blooded sniper who was renowned for her combat capabilities and deadly aim. She was an orphan who lost her home and family in the 2nd Hounkai War and was captured by the Siberian army who trained her as a soldier, which led her on becoming the infamous and feared sniper, the Silver Wolf of the Urals, until she got knocked out by Cocolia, who took her in to her Orphanage, where Bronya met Seele Vollerei. Birthday: August 18. 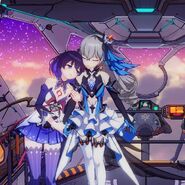 Add a photo to this gallery
Retrieved from "https://yuripedia.fandom.com/wiki/Bronya_Zaychik?oldid=32689"
Community content is available under CC-BY-SA unless otherwise noted.