Chiho Aikawa is one of the secondary characters on both the manga and anime Yuyushiki. She's a quiet and shy girl who wants to become closer to Yui, but she's often intimidated by Yuzuko and Yukari's antics. 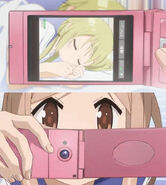 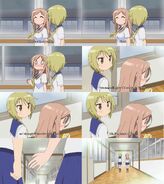 Add a photo to this gallery
Retrieved from "https://yuripedia.fandom.com/wiki/Chiho_Aikawa?oldid=30741"
Community content is available under CC-BY-SA unless otherwise noted.