Chino Kafū is one of the main characters on both the manga and anime Gochuumon wa Usagi Desu ka?. Chino is a kuudere and responsible girl who takes her work very seriously. She has a reserved and emotionless disposition, rarely smiling even when happy, and she speaks in a flat monotone voice with polite grammar. She gets annoyed when people treats her like a child due to being the youngest and shortest of the group, she acts far more maturely than her biological age, which is the reason why she had a hard time accepting Cocoa as a Big Sister figure at the start. 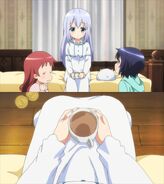 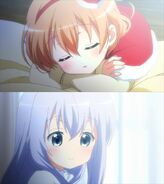 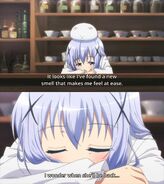 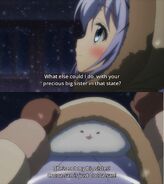 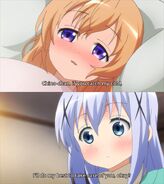 When she snapped out of being drunk.

Add a photo to this gallery
Retrieved from "https://yuripedia.fandom.com/wiki/Chino_Kafū?oldid=36037"
Community content is available under CC-BY-SA unless otherwise noted.