Chiya Ujimatsu is one of the main characters on both the Manga and Anime Gochuumon wa Usagi Desu ka?. Chiya is a gentle and harmonious girl with a calm aura. She is very polite and courteous to the point that she rarely ever expresses negative feelings in order to keep the peace. While a sweet and amiable girl on the surface, it is hinted more than once that Chiya has a darker side to her personality for example when she revels in telling scary ghost stories and disturbing her friends. 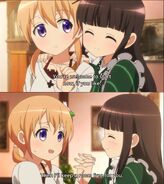 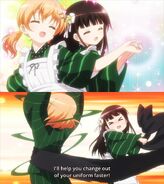 Add a photo to this gallery
Retrieved from "https://yuripedia.fandom.com/wiki/Chiya_Ujimatsu?oldid=31822"
Community content is available under CC-BY-SA unless otherwise noted.