Clarion is a protagonist in the yuri series Pandora in the Crimson Shell. A combat android, disguising as a full-body cyborg. Her body holds the Pandora Device, which temporarily grants Nene enhanced abilities. She is a skilled fighter who often finds herself at the mercy of Nene's admiration. 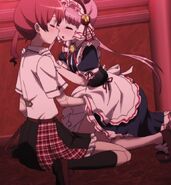 Add a photo to this gallery
Retrieved from "https://yuripedia.fandom.com/wiki/Clarion?oldid=31843"
Community content is available under CC-BY-SA unless otherwise noted.