Eilin is a supporting character from the series Queen's Blade. A Nisctoshi Dwarf from the Gemstone Mountains, a mountain in the Continent that produces gems. She has a refined and elegant personality, but loves to fight, evidenced through the giant war hammer she carries. 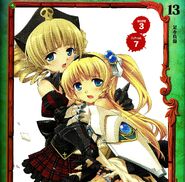 Add a photo to this gallery
Retrieved from "https://yuripedia.fandom.com/wiki/Eilin?oldid=31890"
Community content is available under CC-BY-SA unless otherwise noted.