Futaba Sakura is a protagonist in the yuri visual novel Tsui Yuri. A cheerful, friendly, honest, clumsy and immature girl who lives on intuition, and the twin sister of Ichika. Doesn't let herself be bound by common sense and simply follows her heart. Grades aren't great. In fact, she thinks it's fine if Ichika does well in that aspect. She has good reflexes and is in the tennis club. 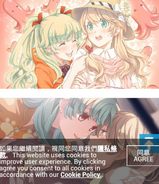 Add a photo to this gallery
Retrieved from "https://yuripedia.fandom.com/wiki/Futaba_Sakura?oldid=34593"
Community content is available under CC-BY-SA unless otherwise noted.