Gabriel White Tenma is the protagonist of the series Gabriel DropOut. An angel who was the top of her class but turned into a 'Faillen Angel' As the "Faillen Angel", Gab is the opposite of what she was, sarcastic, uncaring and lazy. Her birthday is April 20. 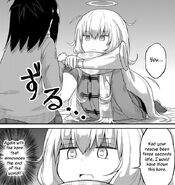 Add a photo to this gallery
Retrieved from "https://yuripedia.fandom.com/wiki/Gabriel_White_Tenma?oldid=34382"
Community content is available under CC-BY-SA unless otherwise noted.