Hana is a protagonist in Yuri Hime Collection. A cheerful and optimist girl who was born from a silver capsule buried in Haru's garden, when it was opened by Haru, smoke poured out of it and coalesced into the form of a beautiful girl, from that time she lives with Haru in one house. 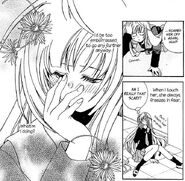 Add a photo to this gallery
Retrieved from "https://yuripedia.fandom.com/wiki/Hana_(Yuri_Hime_Collection)?oldid=31953"
Community content is available under CC-BY-SA unless otherwise noted.