Haruka Shiraishi is a main character the series Chu-Bra!!. A shy girl and Yako's best friend. Helping to raise her three younger brothers, Nayu and Yako are often in awe of her motherly nature. 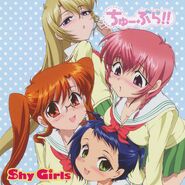 Add a photo to this gallery
Retrieved from "https://yuripedia.fandom.com/wiki/Haruka_Shiraishi?oldid=24885"
Community content is available under CC-BY-SA unless otherwise noted.