Haruko Ichinose is one of the two main protagonists from the yuri manga Swap⇔Swap. She has the ability to swap bodies with Natsuko via a kiss. 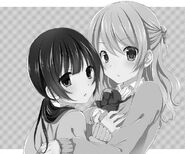 Haruko gropes Natsuko while being hugged.

Haruko always plays along with misunderstandings

Add a photo to this gallery
Retrieved from "https://yuripedia.fandom.com/wiki/Haruko_Ichinose?oldid=27073"
Community content is available under CC-BY-SA unless otherwise noted.