Hazuki is a main character in the story Under The Rose in Yuri Shimai. A quiet and mature girl who came from china, and was bullied by envious people due to living at Mizusawa's house, yet they aren't blood related. The resemblance in her name along with Kei's is that a legend from China said there's a tall Katsura tree on the moon, in the other hand, "Keigetsu" is another name for August/Moon who shares the same kanji. 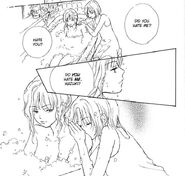 Add a photo to this gallery
Retrieved from "https://yuripedia.fandom.com/wiki/Hazuki_(Under_The_Rose)?oldid=32874"
Community content is available under CC-BY-SA unless otherwise noted.