Hibari is a playable character from the Senran Kagura video game series. An innocent Shinobi who she generally ends up as an accidental troublemaker. She likes playing video games and eating sweets. Her birthday is on February 18. 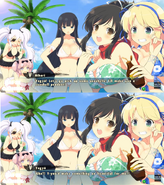 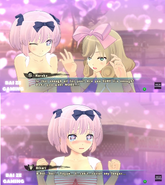 Add a photo to this gallery
Retrieved from "https://yuripedia.fandom.com/wiki/Hibari?oldid=38172"
Community content is available under CC-BY-SA unless otherwise noted.