Hikari Shimooka is a main character in the yuri series Gamma. A student who gained the ability to control light after accidentally touching an alien artifact called the "Brighter Ring", she can compress light into beams to attack with, or cover herself in it to temporarily run at the speed of light, she can also bend light to grant herself invincibility or super vision. She had a dark past about her best friend Miyako's death for being taking as a hostage by an alien, and she blames herself for it. She have a purple eyes. Her birthday is on July 7. Her favorite sauce is Tabasco sauce. She dislikes avocados, monsters and aliens, supervillians, especially the supervillian who killed her Miyako. Her bust size is E cup. 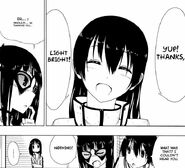 Add a photo to this gallery
Retrieved from "https://yuripedia.fandom.com/wiki/Hikari_Shimooka?oldid=31958"
Community content is available under CC-BY-SA unless otherwise noted.