A girl who A kind and pretty girl living in an orphanage, she is the holder of the "Absolute Sanctuary"-also known as the Dragon's Cry.

Himiko is close to Kaon and subordinate to Mika, she develops determination and courage. Although she enjoys creating pictures, the only subject for her drawings and paintings seems to be Kaon. 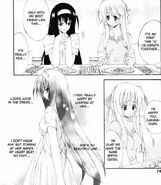 Add a photo to this gallery
Retrieved from "https://yuripedia.fandom.com/wiki/Himeko_Kurusugawa?oldid=31962"
Community content is available under CC-BY-SA unless otherwise noted.