Honoka Kousaka is one of the main characters in the anime and manga Love Live! School Idol Project. She is a cheerful and energetic member of the idol group µ's (Muse) and is its leader and one of the founding members of it. Honoka's family own a Japanese sweets shop, she enjoys swimming and sticker collecting. Honoka is determined and once her mind is set on something, nothing can stop her. 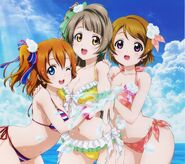 Add a photo to this gallery
Retrieved from "https://yuripedia.fandom.com/wiki/Honoka_Kousaka?oldid=34187"
Community content is available under CC-BY-SA unless otherwise noted.