Hotaru Mizushima is a main character in the yuri series NTR: Netsuzou no Trap. She is Yuma Okazaki’s childhood/best friend. She's a student in the second year of high school, living next door to Yuma. has a secretive and non-revealing nature. Her motives are seemingly constantly changing and end up being unpredictable. At first impression, she could be described as a tease, always cheering on the romance between her friends. Hotaru is considered to be the most beautiful girl at school. 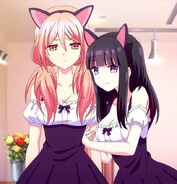 Add a photo to this gallery
Retrieved from "https://yuripedia.fandom.com/wiki/Hotaru_Mizushima?oldid=32940"
Community content is available under CC-BY-SA unless otherwise noted.