IF, also known by her nickname, Iffy, is a human character in the Neptunia series. As the Neptunia series has many dimensions (Hyperdimension, Ultradimension, etc...) there are many IFs in the series with varying, but similar personalities. Most IFs are a childhood friend of Compa as well as a friend of Neptune and Nepgear. 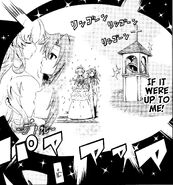 Add a photo to this gallery
Retrieved from "https://yuripedia.fandom.com/wiki/IF?oldid=27207"
Community content is available under CC-BY-SA unless otherwise noted.