Ichigo Hoshimiya is the main protagonist of the series Aikatsu!. A cheerful and kind gung-ho student of Starlight School, who's always willing to help out friends and strangers alike. She is optimistic and works hard to become a top idol. A stubborn airhead, and a cute-type idol whose primary brand is Angely Sugar.Ichigo was a middle school freshman and a coworker of her family's bento shop. She spent most of her time helping out her mother, Ringo Hoshimiya - serving customers with the family's tasteful bento meals. Ichigo is now the top ranked idol, replacing Mizuki Kanzaki and breaking her three-year streak. Some of her favorite food are nori bento, fried ginger pork and fried chicken. Her birthday is March 15. 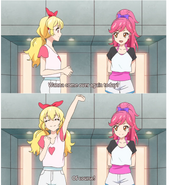 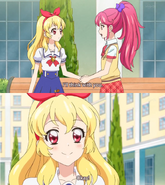 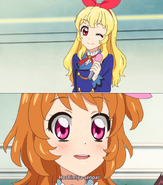 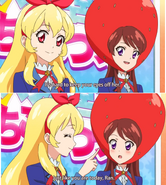