Ichigo Moesaki is a main character in the series Seiyu's Life! (Japanese: Sore ga Seiyuu!.) She is Futaba and Rin's friend as well as a rookie seiyuu, like her name suggests (Ichigo meaning strawberry), she has an obsession with strawberries and has a large collection of strawberry themed items in her apartment. She dislikes bad udon. It has been a few years since she left the Udon country where she was born, since the day she became a Strawberry Princess of Planet Strawberry, her goal has been to become an idol seiyuu. Her favorite food is strawberry sandwiches. Her birthday is 5 May. 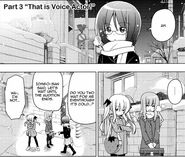 Add a photo to this gallery
Retrieved from "https://yuripedia.fandom.com/wiki/Ichigo_Moesaki?oldid=31997"
Community content is available under CC-BY-SA unless otherwise noted.