Jita Phrygianos is a character in the series The Qwaser of Stigmata. Eleventh of the Adepts, known as Black Diamond, she is Joshua's sister, whom she treats as a fool. Her element is carbon, from which she can create bladed weapons; either form it as a pair of crescent-like scythe or fiber thread; at will. 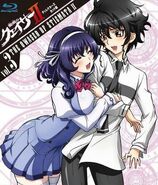 Add a photo to this gallery
Retrieved from "https://yuripedia.fandom.com/wiki/Jita_Phrygianos?oldid=32161"
Community content is available under CC-BY-SA unless otherwise noted.