Kae Hīragi is a main character in the yuri series Re:Stage! Dream Days♪. A member of the unit KiRaRe who is a classmate of Mana and Sayu. Ever since she was an elementary student, she has not been good at communicating with other people and now lives by herself. She is also good at mechanics and has plenty of inventions around her room. She likes Electronic Gadgets, and the infirmary. Birthday:January 5 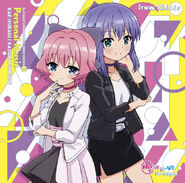 Add a photo to this gallery
Retrieved from "https://yuripedia.fandom.com/wiki/Kae_H%C4%ABragi?oldid=32996"
Community content is available under CC-BY-SA unless otherwise noted.