Kaku Bunwa is a character in the series Koihime Musou. Tōtaku's strategist and adviser. While short-tempered and serious minded, she does not have the heart to say no to her childhood friend Yue. In the first VN Tōtaku was rumored to be an oppressive leader, which caused the campaign against the Tō faction. After the Tō faction fell to Kazuto, it's revealed that the rumors are not true, and Kazuto decides to spare Kaku and Tōtaku. Since no one has seen their faces, Kazuto hires the two to work for him as maids while at the same time he sends out words that Tōtaku has been executed in order to avoid suspicion from the alliance. 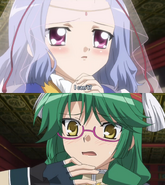 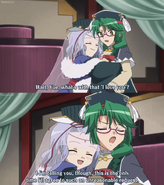 Add a photo to this gallery
Retrieved from "https://yuripedia.fandom.com/wiki/Kaku_Bunwa_/_Ei?oldid=35594"
Community content is available under CC-BY-SA unless otherwise noted.