Keine Kamishirasawa is a character in the series Touhou Project. A were-hakutaku who acts as the guardian of the Human Village. During the events of Imperishable Night, she uses her abilities to conceal the Human Village from the heroines. She shows herself again in the extra stage on the night of the true full moon, having assumed her hakutaku form. She's loyal to her duties to the Human Village, both as a schoolteacher and as its guardian. As a proper teacher, she doesn't like people who are discourteous, but other than that, she is generally friendly towards humans - except, perhaps, for when she has assumed her hakutaku form. In human form, she can "eat" history, as she did in the events of Imperishable Night. Though it is stated as "eating", it is clear that she is only concealing history from outside viewers. In her hakutaku form, however, she is able to create history; she is also apparently aware of the entire history of Gensokyo in this state, according to her official profile. 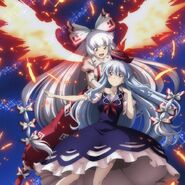 Add a photo to this gallery
Retrieved from "https://yuripedia.fandom.com/wiki/Keine_Kamishirasawa?oldid=34724"
Community content is available under CC-BY-SA unless otherwise noted.