Kizuna Hyūga is a supporting character in the yuri series Strawberry Panic!. A very outgoing, hyper and a bit of a klutz. She tends to be very expressive in her actions and words, not wasting any chance to introduce herself to someone new. 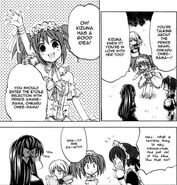 Add a photo to this gallery
Retrieved from "https://yuripedia.fandom.com/wiki/Kizuna_Hy%C5%ABga?oldid=32109"
Community content is available under CC-BY-SA unless otherwise noted.