Konata Izumi is one the main characters on both the Manga and Anime Lucky Star. She is the leader of the Lucky Star crew, and is the protagonist. She is smart at times, but she hates studying. She loves video games, manga and anime, sometimes she even visualizes real life like video games or anime. She's a professional VN player and likes to play Galges and Eroges directed at both genders, equally. Her birthday is May 28. 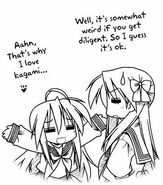 Add a photo to this gallery
Retrieved from "https://yuripedia.fandom.com/wiki/Konata_Izumi?oldid=32071"
Community content is available under CC-BY-SA unless otherwise noted.