Kureha Tsubaki is the protagonist of the series Yurikuma Arashi.

A student at Arashigaoka Academy who has a strong hatred of bears after her mother, Reia Tsubaki, was killed by one. Kureha is not very open to others, but she is very caring. Her birthday is May 30. 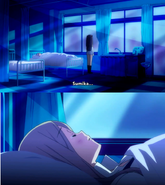 Add a photo to this gallery
Retrieved from "https://yuripedia.fandom.com/wiki/Kureha_Tsubaki?oldid=35346"
Community content is available under CC-BY-SA unless otherwise noted.