Kuro is a main character in the story Nekoroma in Yuri Hime Collection. A Nekoroma (A cat died with strong regrets) set in the flourishing civilization of a romantic era in Japan, she coexist with humans because she fulfills the job that is asked of her. She's thoughtful and assertive cafe manager who assigned Misuzu with the job to kill the owner of the dumpling shop next door in order to protect the cafe's prosperity. There are memories of Misuzu in her past life. 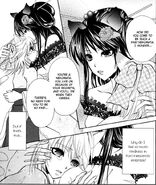 Add a photo to this gallery
Retrieved from "https://yuripedia.fandom.com/wiki/Kuro?oldid=34754"
Community content is available under CC-BY-SA unless otherwise noted.