Lapis Lazuline is a character in the series Mahou Shoujo Ikusei Keikaku. Part of Team Bell. She is a childish, cheerful, and enthusiastic Magical Girl. She dropped out of high school in order to focus on her mentor's training. She is easily excitable and makes a lot of gestures while talking. She also demonstrates bravery while fighting, stating that she likes being a hero. She is also very perceptive and intuitive. She notices details that others overlook and claims that she can easily understand what somebody is trying to say after a few minutes with them, regardless of language, by observing their actions and using context clues. This is further evidenced by the fact she is the only one who understands Melville's typical speech. She can use gems to teleport even if it's cracked in pieces. 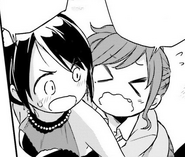 Add a photo to this gallery
Retrieved from "https://yuripedia.fandom.com/wiki/Lapis_Lazuline_/_Blue_Comet?oldid=33155"
Community content is available under CC-BY-SA unless otherwise noted.