Leo is a playable character from the Senran Kagura video game series.

A wealthy celebrity, and the cleaver leader of the Zodiac Star Committee. Her fighting style centers on high-speed, slashing attacks from her laser blade. 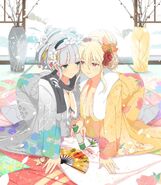 Add a photo to this gallery
Retrieved from "https://yuripedia.fandom.com/wiki/Leo?oldid=33163"
Community content is available under CC-BY-SA unless otherwise noted.