Lily White is a protagonist in Yuri Hime Collection. The fairest naive girl, her skin as fair as lilies, her hair as dark as a moon-less night, and her lips as red as rubies. She narrowly escaped the evil clutches of her stepmother, who had been driven mad by jealousy, as she wandered the forest, she came across a deserted cottage standing in the shadows of the trees. 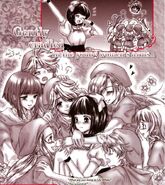 Add a photo to this gallery
Retrieved from "https://yuripedia.fandom.com/wiki/Lily_White?oldid=32121"
Community content is available under CC-BY-SA unless otherwise noted.