Lumière is a main character in the yuri series Kiddy Grade. Several years younger than Éclair and much more serious, grave, and devout in her duty, Lumière likes to get the job done as quickly as possible. Lumière has the ability to stay in constant contact with their space ship, which has it own consciousness. She thinks girls of their position and rank should always limit their emotions and always try to act elegant. Lumiere is a French word, meaning "light". 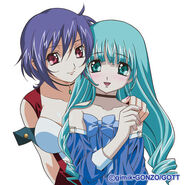 Add a photo to this gallery
Retrieved from "https://yuripedia.fandom.com/wiki/Lumi%C3%A8re?oldid=33185"
Community content is available under CC-BY-SA unless otherwise noted.