Marina Lednev is a supporting character in the yuri manga Gamma. The Kitajishi's sisters boss, she has a her grandfather is the commander-in-chief of the earth defense force. Her birthday is on June 30. Her bust size is D cup. She likes to bath and her favorite food is boiled pumpkin. She dislikes celebrity gossip, celery, evil aliens and humans, and supervillians. 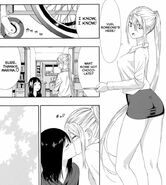 Add a photo to this gallery
Retrieved from "https://yuripedia.fandom.com/wiki/Marina_Lednev?oldid=32217"
Community content is available under CC-BY-SA unless otherwise noted.