Mayu Semimaru is a supporting character in the yuri manga Sasameki Koto. A first year high school student who joined the girls' karate club. She can be aggressive sometimes especially towards her childhood friend Koino Matsubara. 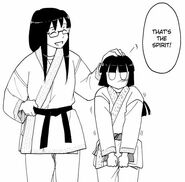 Add a photo to this gallery
Retrieved from "https://yuripedia.fandom.com/wiki/Mayu_Semimaru?oldid=32231"
Community content is available under CC-BY-SA unless otherwise noted.