Mayu Shīna is a main character in the yuri visual novel Lilycle Rainbow Stage!!!. Mai's older sister. Graceful as ever and popular with the boys, in reality, however, she's lazy and sees the world around her as bothersome. Since she pushes her tedious, everyday necessities on Mai (doesn't mind it at all), Mayu is pretty bad at the basics of domestic chores but has been helping Mai out lately and has even reached a point where she can cook on her own, though her room is a mess. Mayu is also currently a member of the art club. Her birthday is 14 June. 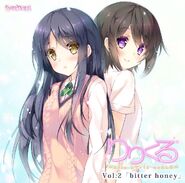 Add a photo to this gallery
Retrieved from "https://yuripedia.fandom.com/wiki/Mayu_Sh%C4%ABna?oldid=34422"
Community content is available under CC-BY-SA unless otherwise noted.