Michiru Kaiō / Sailor Neptune is a supporting character in the series Bishoujo Senshi Sailor Moon. She is caring, almost always offering a smile or laugh to a situation. While polite and calm to a fault, she is not the most social person, but when she does become close with someone it is because she truly wants to. Elegant, sophisticated, though sometimes cold, she can use her talisman to predict events of a close future. 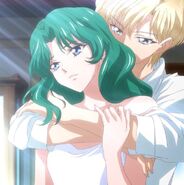 Add a photo to this gallery
Retrieved from "https://yuripedia.fandom.com/wiki/Michiru_Kaiō_/_Sailor_Neptune?oldid=32252"
Community content is available under CC-BY-SA unless otherwise noted.