Midori is a main character in the story Testify from Yuri Shimai. A vampire girl who never seems to have any energy since she doesn't suck blood regularly. She fed on Rin's little sister, Kana, since she asked for Midori to eat all of her, the little girl she captured didn't try to resist her, she just asked her, starved as Midori was, to eat all of her but to leave Rin be, yet her heart is full of regret for killing her until now. She doesn't believe in God, and wears a cross with its parts aren't all connected like they should be. She doesn't have a home. 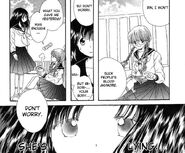 Add a photo to this gallery
Retrieved from "https://yuripedia.fandom.com/wiki/Midori_(Testify)?oldid=34272"
Community content is available under CC-BY-SA unless otherwise noted.