Mika Kujīn is a supporting character in the yuri series Kananemo. Mika delivers newspapers at another center, although she won't admit it unless directly confronted. She is quick to blame others, and frequently turns her mistakes into inconveniences. She transferred from White Rose Academy. 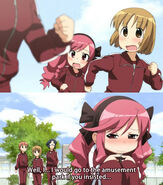 Add a photo to this gallery
Retrieved from "https://yuripedia.fandom.com/wiki/Mika_Kuj%C4%ABn?oldid=32262"
Community content is available under CC-BY-SA unless otherwise noted.