Mikura Sado is a character that appears in Kakegurui Twin. She is the personal housepet of Sachiko Juraku. Mikura is an extremely loyal, devoted and subservient to Sachiko Juraku as she does everything for her. In the past, she had a reputation for being a sadist due to how little she seemed to care about people losing against her. However, everything changed the day she gambled against Sachiko and lost. She was forced to bear with countless humiliations, wearing a collar in front of everybody and serving her every day. After a week, she challenged Sachiko again, eager to get rid of said collar. Yet, she lost again, and again, repeating the same process multiple times. At some point, her spirit broke and she started to find joy in Sachiko's domination, saying she never enjoyed to bully others. 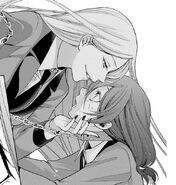 Add a photo to this gallery
Retrieved from "https://yuripedia.fandom.com/wiki/Mikura_Sado?oldid=33315"
Community content is available under CC-BY-SA unless otherwise noted.