Mimori Tougou is one of the main characters in the Anime Yuuki Yuuna wa Yuusha de Aru. A second-year in middle school and member of the Hero Club, she lives next door to Yuuna. She had lost the use of her legs, along with some of her memories, allegedly due to a car accident. In her hero form, she uses guns and sniping rifles for long-range combat and her ribbons serve as appendages for moving around. 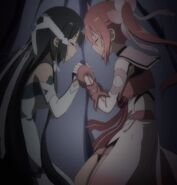 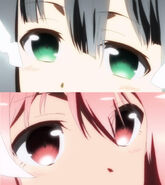 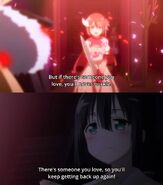 Add a photo to this gallery
Retrieved from "https://yuripedia.fandom.com/wiki/Mimori_Tougou?oldid=32270"
Community content is available under CC-BY-SA unless otherwise noted.